it's amazing, how much crap I let go of every time I move. It's like shedding a small mountain of books and CDs. and I still have so many fucking books. Of course I'm sitting down and flipping through most of these as I put them in the chuck pile and finding pretty much every single slip of paper I've lost in the past 2 years. I'm up to my ass in boxes and I've got more work to do.
I can't even think straight because of these attempted attacks in London and Glasgow. What the fuck is going on? But at the same time, I guess we should just be happy that they were stopped.
But still, it's definitely given things even more of an edge.

the new most disgusting sounding drink ever? Gator Milk.

Email ThisBlogThis!Share to TwitterShare to FacebookShare to Pinterest
Labels: the inner net

The Daily Show had a little thing last night where they went through the various operation names we've had in the Iraq war. In case you missed it, read through them here. The fact that we've had an "Operation: Beastmaster" alone should be a pretty clear indication as to how ridiculous this whole thing has gotten.
at 1:09 PM No comments:

Email ThisBlogThis!Share to TwitterShare to FacebookShare to Pinterest
Labels: TV 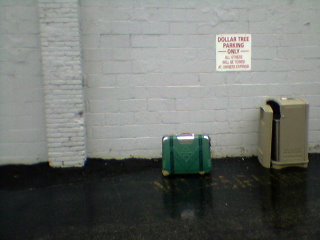 I saw this walking into work yesterday morning and for some reason it really got to me. I was thinking for awhile that some poor senile person had mistaken the dollar store for an airport terminal, which meant that at that moment they were probably trying to recline a stack of frozen peas inside or something. There was no phone number on the luggage tag, so I just went on with my day and it was gone by the time I left that night. No word on whether a bomb squad took it away.

Was woken up (as I have every day in recent memory) by the hated neighbor, who was constructing some sort of worthless sign or some bullshit. I am not a handy person, per se. But I know the right order in which to do basic construction/carpentry jobs, and I can promise you that that bastard was doing it wrong just so he could make more noise at 7:15 AM. The motherfucker is toying with me, and seeing how I only have three weeks now to toy back, it looks like I should step up my efforts. Time to assert myself. Oh, and this goes for the abortion protesters up the street, as well.

"Why Did I Drink So Much Last Night?" - Fourth of July

just a total aside, can we fucking stop sending weapons into already fucking scary situations, please? I mean, how many time has arming someone for fight our enemy come back to bite us in the ass? I can think of five without even stopping as I type this.

Let's think about this. Group A is bombing American troops. Then, two months later, they decide al-Qaeda is a bigger threat to their beliefs, so we give them massive weapons shipments to fight al-Qaeda. How does this possibly work? And let's just say that through the miracle of Allah of whatever these people do what we -the eminent military industrial complex of the world- cant and defeat the international terror ring from withing one country. Who do you think they'd turn their guns on? Drug Dealers? Michael Moore? Hippies? For fuck's sake, to think that some asshole was paid more money than I'll see in the next 5 years to come up with this short-term gagortion of a plan is just fucking ridiculous. We should also start sending them missiles that can almost reach the US. that way we're totally safe. Good going, assholes. Way to outsource. 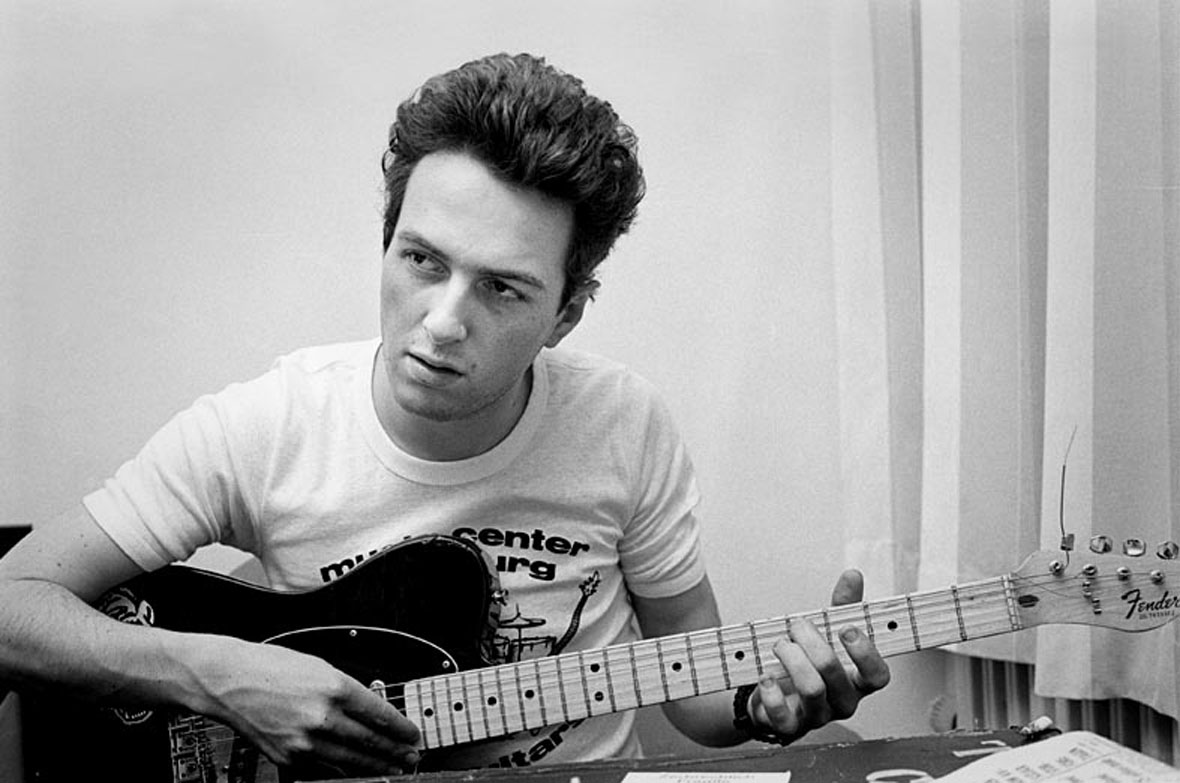 I know this isn't really a song or anything, but I came across this last night and was just beside myself with the feeling in Joe's voice here -of frustration and exhaustion but also an underlying current of hope. I was talking with a good friend last night (actually, a bunch. Cotton has 4 weeknight beers and the dialing begins) and he asked how I keep a positive outlook on things when things -from my perspective, at least- can appear so bleak. I didn't have an answer then, but I guess it would've been very similar to this clip here. I have hope because I know change is possible.

on an entirely unrelated note, I got a job in CA and am now gonna be moving even earlier, so my posting is probably going to become pretty erratic (as if it weren't already). But I promise I'm going to try to update frequently and I'll totally document the drive out there, which should be fun. Just a heads up.
at 12:44 PM 1 comment: Spent plenty of time visiting in cemeteries over the weekend. I'm not complaining, it was nice. But while in a Catholic cemetery* I noticed the grave in the picture above. I wish I'd had an actual camera on me instead of my shitty phone, because had I stood back about 75 yards you'd see this giant lot crammed with graves and then in the background this giant empty lot with a solitary grave. I'd always heard this, but still wasn't sure until I was told that it was the grave of someone who had committed suicide. Doesn't that just suck? If I believed in an afterlife, I'd be pissed. I mean, isn't one of the big problems with depression, that people feel helplessly alone? I mean, why not bury a pedophile at Disney World? I've seen the graves of murderers, child molesters, and rapists, and they were all buried with more dignity than this.
Sorry, this just pisses me off. At the same time, though, why bury them there at all? I think I'd rather be thrown on a compost pile than blatantly ostracized like that. Mental note: is that legal?
On a more positive note, there will now be an apt. waiting in Cali, and if I'm lucky a job. Had an interview that went surprisingly well, if for a startlingly similar job to the one I have now. So yeah, that's now very interesting. I'm working on something that might be, though. Stay tuned.

I literally fell into a Zen Guerrilla show one night when the upstairs bathroom at the Khyber was destroyed and I had to use the downstairs one. I was at that perfect window between three beers and forty, and I distinctly remember thinking that the band sounded better than whatever review I had read.They were pretty high-intensity, and the singer was like a towering man-beast, howling like his hair was on fire. In all though, I really enjoyed myself and bought the album the next morning when I'd sobered up. For me, that's a ringing endorsement. I'd say one of my favorite Delaware bands ever.
"Barbed Wire" - Zen Guerrilla
"Staring into Midnite" - Zen Guerrilla
"where's My Halo?" - Zen Guerrilla

Buy Shadows on the Sun here.

Also, the Go! Team signed to Sub Pop! Huzzah! If the album is half as good as the last one, I'm gonna be a happy guy.

on a side note, to the executives that decided to air Big fish on Father's day: fuck off. I love that movie, and it pulls at my heart strings at ways that I have never felt before. It's a beautiful sentiment and I appreciate your showing it on Father's Day. But keep your shitty promos off the screen and stop marketing in my tender moments. Thankfully, I got to turn it off and wait until I got home to pop in the DVD.

*Also, do we really need to be buried separately? Would you want to spend the afterlife in a church setting?
at 8:40 PM 1 comment:

Email ThisBlogThis!Share to TwitterShare to FacebookShare to Pinterest
Labels: music, my life, pics 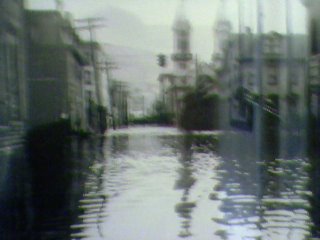 I'm still alive and well, but trying to wrap up a LOT of loose ends and generally just trying not to lose my shit in the calm before the move to California.

Anyways, my attitude towards They Might Be Giants varies from super annoying to well-respected songsmiths. This is a song they did for Sarah Vowell that's been turning into my mantra as well as hers. It's catchy and short. I had 4 other songs to post to day to make up for my absence, but in a typical fashion, my ipod just exploded an hour before I drive to Pittsburgh with no CDs in the car. boo. So hopefully I'll have something Sunday. 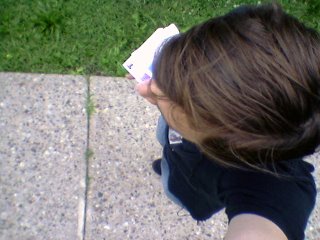 Walking to the post office. About as boring as it looks.

Email ThisBlogThis!Share to TwitterShare to FacebookShare to Pinterest
Labels: my life, pics

It’s fucking mind-boggling, and driving me insane faster than slow. I’ve got a questionable weekend ahead of me. Actually, pretty much every weekend between now and the move is questionable, which is pretty depressing when you think about it.

Anyways, I could kiss Conyers on the mouth right now for calling Tim Griffin (and by extension Rove) on his bullshit caging tactics.

I was looking for a link to the Inky article about the police selling seized weapons back to the shady dealers, and in the meanwhile I came across yesterday’s police blotter. It’s filled with some pretty atrocious stuff, among among which the details of a murder that eerily shadows that of a friend of mine a few years ago. And then at the end a story about a trapped dolphin being freed in the . So that’s the tally. 1 adult and 2 children dead, one dog dead, and one dolphin rescued. That little motherfucker better live a long and fruitful life. I want that Dolphin to live to be 127 and sire thousands of baby dolphins. Which could start by it getting the fuck out of the .

The Bowerbirds are a trio from Raleigh who I just found out was playing here last sat. night, which I’m kinda pissed I missed. They play a sort of folk-romp thing, a description I’m sure doesn’t do them justice (which is surely given them in Darnielle of Mountain Goats’ recent blog entry). Anyways, I highly recommend the album, which will be available on July 10.

“In Our Talons” – The Bowerbirds

“My Oldest Memory” – The Bowerbirds

Pre-Order Hymns for a Dark Horse here. and what the hell, here’s Yves Montand singing about fucking! in English! The latter is pretty rare. The former is not at all.