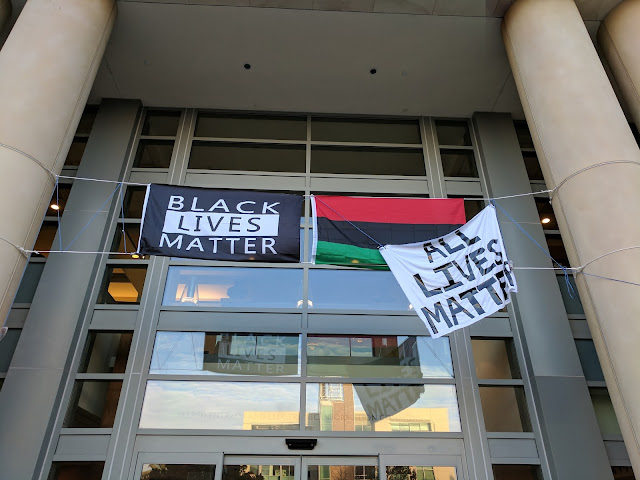 I actually forgot I took this. I work at a college in the heart of Southern California's conservative stronghold. So I was impressed when my library requested (and received) permission to hang two Black Lives Matter banners on the front of the building, facing the central piazza of the campus. I was slightly discouraged, then, when I arrived for work the next morning to see someone had gone to great effort to hang an All Lives Matter banner over the pan-African one that had been hung the day before. We were unable to do much but call facilities and have them remove it. But before they could, a young black student sat directly beneath the banners with a homemade sign that read "But will you say it to my face?"

It didn't take long for the student who'd snuck the banner up the previous night appeared. To his credit, he identified himself and claimed responsibility for what he'd done. He wanted to have a discussion about the movements behind both banners. And that's exactly what they did. They sat well into the afternoon, by which point a crowd increasingly hostile to the young man had gathered. While the dialogue was contentious, it was relatively mild mannered until a member of the crowd picked up a trash can and went to throw it at the guy who'd hung the sign. Seeing it about to happen, the young woman then put herself in front of him to prevent the attack from happening. The debate continued a little while longer. I can't say if anything was resolved or whatever, but it ended without incident. It really meant a lot to me to witness this. It's so easy to experience all of this through online vitriol and massive rallies that we forget that

With what's going on right now, it's so, so easy to paint people we don't know with a wide brush. It's easy to make assumptions. It's easy to forget that not everyone who disagrees with you is evil or racist or bent on world destruction. Sometimes they are just looking for answers. We cannot conflate every single person we disagree with the leaders of the movements we disagree with. I am repulsed by plenty of things on the left side of things, just as I am with the right. I will push back on everything the current political climate is churning out, but I refuse to scream at people in the streets because of who they voted for. I will continue to stand for what I believe in, but I will not act like a child in order to do so. I refuse to shout over a shouter. I am grown and I will use my voice as I see fit. I will be heard. I will let my passion drive me, but not control me. I will fight ideologies with information, and I will fight ignorance with education. I will fight hate with love. We are all human. the second we discount that, there isn't anything left to fight over.

Don't be passive. Don't grow complacent. But above all, act like a fucking human being please.